Dear All
Final part of my catch up so I can start back in the real time tomorrow! Last weekend was not only Deans Birthday, but also the first of my dilemma weekends as it was also The Craft Barn extravaganza. This was a tricky one as Deans Birthday is September 11th, and therefore a day of quite mixed emotions as we know people who were involved that day and lost friends and family. As a consequence we always try to go away just the two us..... This year he suggested we went to the South Coast, so I casually suggested a stop off in Lingfield and he went for it....... (What a great guy!!)

The Craft Barn had really laid on a treat with not only one, bit two halls full of demo's and loads of yummy new stock in the shop. As always the credit card took quite a hit as I picked up some lovely new dreamweaver stencils & a few new stamps for Xmas (God is it really time to start Xmas cards its still so warm outside!). I had such a fab time, and really had to drag myself away to carry on our trip.
We spent the night in Dover at this fabulous B&B Hubert House, which has built itself quite a reputation over the years as a place where people stay when they are doing the cross channel swim. At breakfast we met an Australian who was waiting to do his first swim with his coach. I don't think I would fancy it, but each to their own. We spent the night in their Georgian Suite, which was very romantic with a Four Poster bed. Dover is not a place that immediately springs to mind as a weekend destination, but we had such a great time visiting Dover Castle and walking in Western Heights. 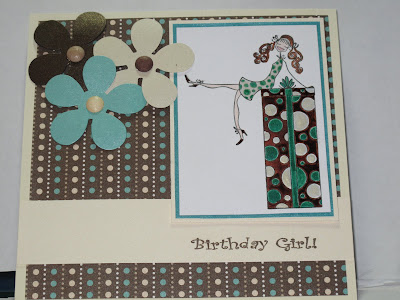 Anyway back to the cards, here is one I made for one of my work colleagues Birthday for tomorrow.

Littleminx
Surrey, United Kingdom
Hi there Thank you for visiting my blog. Only time will tell if I manage to keep up with all this technology and how often I really will post! I live in leafy Surrey with my gorgeous Dean and cat Minx and spend as much time as possible crafting which is not a long as I wish as I work full time as an Accountant in Higher Education All cards and other creations are my copyright - I am more than happy for you to use my creations as inspiration, however please respect my right not to have my designs copied or enter them for publication, competitions, etc.

Whiff of Joy give away