Birthdays and crafting - What a great combination

As I said on my previous postings I have been trying to get all my antics of the last week uploaded and failed three times so this is the last part of my post from the weekend. I have quite a number of birthdays this week and so have been busy trying to get together a pile of cards so I don't get caught on the hop so to speak. (non seasonal pun intended!)
Saturday I took my friend Hilary to a Jane Gill class at the Glitter Pot, which was great fun albeit there was a huge amount of cutting out which she was not happy about we did a great card using the Hero Clear Design - Printed Flowers stamps. (115/365)
I will link to the card on Jane's site once she has loaded it.
Afterwards we went off to another friends house for a party for her daughter who was four. We managed to arrive just as all the kids were worn out or leaving (what a shame LOL). Anna was having a great time and loved our present which was a big box of crafting goodies I had put together to start her on the right way forward. 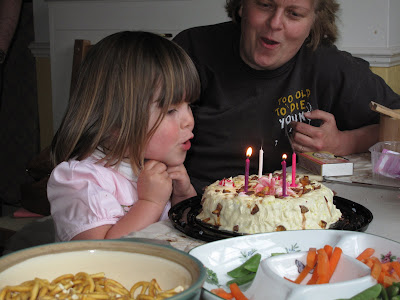 We had a fantastic evening sitting around chatting to people that I hadn't seen for ages, but it was a little curtained as I got a call from Dean to say he had managed to take a bounce into his face when playing cricket and had just got back from the hospital. Fortunately they managed to glue and steri strip the cut, but he has a lovely shiner developing now!

Sunday was free so I managed to get our in to the garden for a while, but although it was sunny it got quite cold later on allowing me to sneak off and do some crafting for a little while. 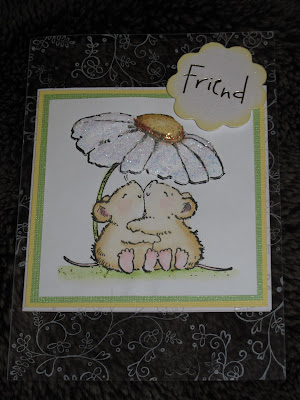 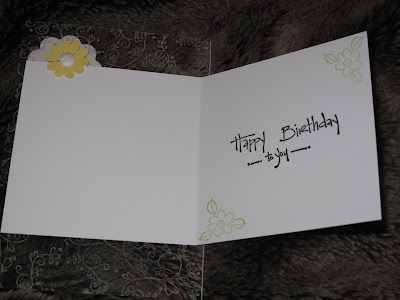 I had a packet of acetate cards, which I had sitting in my stash for ages and this stamp just looked so good on a smaller layout. 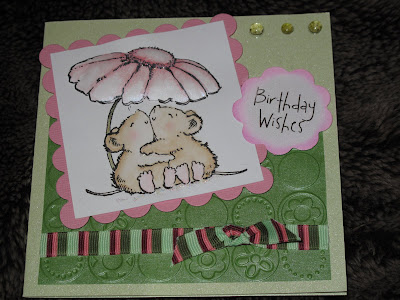 Phew, well that just about wraps it up. All that precious crafting time wasted......

Littleminx
Surrey, United Kingdom
Hi there Thank you for visiting my blog. Only time will tell if I manage to keep up with all this technology and how often I really will post! I live in leafy Surrey with my gorgeous Dean and cat Minx and spend as much time as possible crafting which is not a long as I wish as I work full time as an Accountant in Higher Education All cards and other creations are my copyright - I am more than happy for you to use my creations as inspiration, however please respect my right not to have my designs copied or enter them for publication, competitions, etc.

Whiff of Joy give away